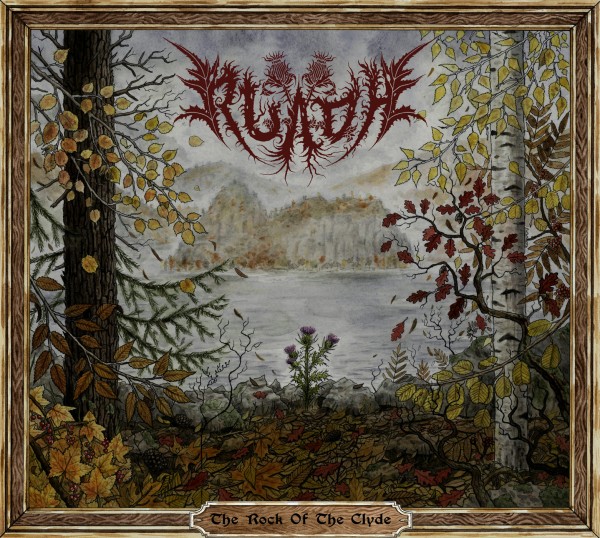 The first press of the CD will be released as Collector’s Edition in Digipack, limited to 500 copies.

Ruadh's sophomore album contains six tracks of epic, Scottish Atmospheric Black Metal with Folk elements that are massive in both scope and scale, taking you through the Iron Ages in Scotland. It also explores the history and mythology of the people of Scotland, conveying both sorrow and uplifting, almost heroic tones.

‘The Rock of the Clyde’ is an evolution from their debut album ‘Sovereign’. It has a much more melodic feel, yet has more visceral elements too.

Ruadh mastermind Tom Perrett, hailing from Rutherglen (also known as the red glen) in the central belt of Scotland, looks to forge a sound akin to the classics he has always enjoyed, such as Bathory, Burzum, Windir and Emperor. However, Ruadh’s sound will also appeal to fans of newer Atmospheric Black Metal bands such as Saor, Winterfylleth and Panopticon.

"The Rock of the Clyde is an incredible achievement for RUADH. Carving out a very distinctive identity, its clear that Perrett has struck gold with his evolution from Sovereign. Throughout the record, RUADH captures Scotland, creating a perfect sonic representation of the nation – the brutality of the history of Scotland is omnipresent, as is the great sadness and despair. But more than that, amid the melancholy and black metal aggression, there is a very real sense of beauty running throughout The Rock of the Clyde. This is the most emotionally touching black metal album of the year thus far, and a true masterclass of atmospheric black metal. Saor Alba." - 10/10
https://distortedsoundmag.com/album-review-the-rock-of-the-clyde-ruadh/

"Honestly, RUADH’s “The Rock Of The Clyde,” is the best folk infused metal album (blackened or otherwise) I’ve heard in a long time.  If you want to get into black metal or folk metal this album would be a good start.  If you enjoy these genres already, this album needs to be added to your collection immediately." - 9/10
http://www.metal-temple.com/site/catalogues/entry/reviews/cd_3/r_2/ruadh-the-rock-of-the.htm

"I have listened to this album numerous times and every time, it has been from start to finish…..No skipped tracks, no jumping from one to another. It really sucks you in and just flows from beginning to end. I was really reminded of how I listened to “Aura” nonstop when it came out. I think this will really resonate with a large audience while being heavy and accessible. A great sophomore effort and one that I certainly see me listening to a ton in 2020." - 8.5/10
https://www.folk-metal.nl/2020/05/ruadh-the-rock-of-the-clyde-2020/

"“The Rock of the Clyde” is actually a belter. I could now really kick myself for my self-stupefaction last Summer, and wish I that I had seen this band in full flight. There are a couple of caveats to the album; firstly, while I personally loved them, some might find the clean vocals a bit of a turn off. Secondly, you may need some attention span to listen to a succession of post-ten minute epics. Me? I thought it was great." - 8/10
http://www.avenoctum.com/2020/05/ruadh-the-rock-of-the-clyde-northern-silence-productions/

"In ‘The Rock of the Clyde’, Ruadh hone in on a Viking-era Bathory vibe, with atmospheric backing choirs supporting a well-delivered baritone. [...] These clean vocals go a long way to helping deliver the massive emotional payload behind this album. Atmospheric black metal is at its best when the melodies stir up feelings within the listener, whether that be the triumph of Caladan Brood or the sorrow of Pure Wrath. [...] Ultimately, The Rock of the Clyde surpasses my already high hopes for Ruadh and will go down as an album of extraordinary quality. It’s a record that grows with each listen, new nuances revealing themselves every time. It’s simultaneously serene and savage, and carries the mantle of Caledonian Black Metal with righteous aplomb."
https://blackmetaldaily.wordpress.com/2020/05/01/rise-of-the-red-glen-a-review-of-the-rock-of-the-clyde-by-ruadh/